For those who are interested in what life was like for residents of cities caught in Civil War battles, Constance Cary Harrison's article titled "War-Days in Richmond" makes for fascinating reading. The article was published in Appleton's magazine, July 7, 1872 and can be read online at the University of Michigan's Making of America website. Here is a link to the article: 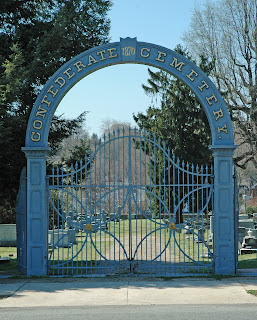 Fredericksburg's Confederate Cemetery is located away from the Battlefield, not far from Kenmore, the home of George Washington's sister, Betty Lewis. It is a beautiful and peaceful place. Although it is called the Confederate Cemetery, there are more civilian graves than military. About one quarter of the area hosts the small rectangular tombstones, the engravings on most of which are almost worn away. A few of the gravesites have modern bronze markers in addition to the stone rectangular ones, presumably put there by descendants. Walking down the rows, reading those markers with names and dates, is a sad reminder of lives cut short.
Posted by Carolyn at 3:01 PM No comments:

Musical Bombardment by the Yankees

I heard the Yankees this evening with their full brass band playing 'Yankee Doodle' and 'the star spangled banner'. I could not realize that they were enemies and invaders. The old tunes brought back recollections of the old love for them. It was a sad and painful feeling.
Posted by Carolyn at 8:30 AM No comments:

WPA Guide to the Old Dominion

A search for directions to the birthplace of Matthew Fontaine Maury (father of Betty Herndon Maury, whose diary I am transcribing) led to the discovery of a wonderful internet resource for those exploring the history of Virginia: The WPA Guide to the Old Dominion. It is located at:

The introduction to the internet edition reads:

Virginia: A Guide to the Old Dominion was originally compiled during the Depression by the workers of the Writers' Program of the Work Projects Administration in the State of Virginia. First published in the American Guide Series in 1940, it was sufficiently popular to receive three more printings in 1941, 1946, and 1947. Out of print for nearly half a century, it was finally re-issued by the Library of Virginia in 1992.

The internet edition has been published by the American Studies students at the University of Virginia.
Posted by Carolyn at 5:02 AM 1 comment:

The Past - by Ellen Glasgow 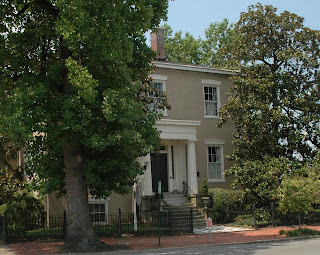 Today I read a story by Ellen Glasgow called "The Past". It is a ghost story, and an excellent one at that.

Ellen Glasgow is a Virginia native and much of her fiction is set in Virginia. The setting for this story is not specified (unless I missed it in my hurried reading), but one of the main characters is said to have attended a school for girls in Fredericksburg.

The ghost in the story is that of the husband's first wife. She cannot be seen by everyone. The husband seemingly cannot see her, but he is affected by her presence. The second wife can see the ghost, as can her secretary. It is an interesting ghost story, different from others I have read. I don't want to give away the plot, so I will confine myself to recommending it to those who enjoy ghost stories.

A digital edition of "The Past" is available at http://gaslight.mtroyal.ca/thepast.htm

While writing about Ellen Glasgow, let me commend a movie version of one of her books: In This Our Life, a 1942 movie starring Bette Davis, Olivia de Havilland, George Brent, and Charles Coburn. I particularly enjoy the magnetism between Bette Davis and Charles Coburn in this film.
Posted by Carolyn at 7:12 PM No comments:

A beautiful day, warm and sunny, caused me to abandon my plans for unpacking moving boxes, grab my camera and head out to the James River plantations. I have visited two of them in past years, and have wanted to return to see the others.

My first destination was Westover, built in about 1730 by William Byrd II. An article in the May 1871 Harper's New Monthly Magazine set the stage for my trip, describing a festival sponsored by the Virginia Agricultural Society. The article described the house and the grounds, including a cemetery about a quarter of a mile walk from the house.

It is a grand house. It is a private home, not open to the public, although the owners graciously allow visitors to walk through the grounds. Guided by the Harper's article, I photographed the gateway opposite the back entrance with its wrought iron monogram and two large martlets, one on each post. I found my way to the garden and the tomb of William Byrd, who died on August 26, 1744. "It is considerably dilapidated, and that dilapidation was increased during the occupancy of the estate by the violence of some disorderly soldiers, who not only desecrated it by chipping away pieces as mementoes, but robbed it of the escutcheon, bearing the arms of Colonel Byrd, which adorned the front of the shaft. Let us hope that it was some one ignorant of the historical importance of the relic, and who may be induced - if he should ever see these pages - to return it to its owner, to be replaced where it belongs, and where, for over a century and a half, it had adorned the tomb of one of the accomplished of our land."
The escutcheon is still missing.

Posted by Carolyn at 1:15 AM No comments: