A Literary Discussion in 1858

Continuing reading in Reminiscences of Peace and War, I came upon the following description of a discussion at a party in Washington in 1858. "We talked of art and artists, galleries in Europe, shops in Paris, - anything except what we were all thinking about. . . . But some interesting books were just out in England, and everybody was discussing them. Thackeray had recently given "The Virginians" to the world. Tennyson was turning all the girls' heads with "Elaine." A new star was rising - George Eliot. Dickens, we were, at the moment, cordially hating because of his "American Notes." Bulwer was well to the fore. . . . "

Reminiscences of Peace and War

I have begun reading what promises to be a wonderful book titled Reminiscences of Peace and War by Mrs. Roger Pryor, available for pdf download at:

The beginning of the book gives a woman's eye view of Washington DC starting with the inauguration of Franklin Pierce as president in 1853. It is a delightful book, and I am looking forward to reading it for the social history of these tumultuous years in American history.
Posted by Carolyn at 8:34 AM No comments:

The Haunting of Mannsfield

Mannsfield is said to be haunted by the ghosts of Confederate soldiers who have been seen beneath the trees on the estate. For more information, see The Ghosts of Fredericksburg at the Central Rappahannock Regional Library:

http://www.historypoint.org/columns2.asp?column_id=455&column_type=tour
Posted by Carolyn at 8:06 AM No comments:

I have found more information on Mannsfield. The Library of Congress has documents, photos, and drawings done of Mannsfield as part of the Historic American Buildings Survey. The URL to the Mannsfield page is quite long, too long to be inserted here. It can be accessed by going to http://www.loc.gov/, typing Mannsfield into the search box, and then clicking on the HABS link. I have not yet read the report or looked at all the photos and drawings, but it looks to be the most comprehensive information I have seen on this home. It was probably built sometime between 1770 and 1776 by Mann Page the fourth.
Posted by Carolyn at 8:21 AM No comments:

This is the Innis house (sometimes spelled Ennis), located on the Fredericksburg Civil War Battlefield on Marye's Heights. It will be open during the commemoration of the 145th anniversary of the December 1862 Battle of Fredericksburg on 8-9 December 2007. The house suffered heavy artillery damage during the battle. The exterior clapboards were replaced, but peering in through the windows, damage to interior walls is visible.
The house is near a monument to Confederate Sergeant Richard Kirkland, known as the Angel of Marye's Heights. He carried canteens of water to wounded and dying Union soldiers on the battlefield. Kirkland was only 19 years old when he performed this act of mercy. He survived Fredericksburg but was killed at Chicamauga, Georgia in September 1863.
Posted by Carolyn at 2:17 PM No comments:

In reading about the Civil War battles at Fredericksburg, I have come across reference to a house known as Mannsfield. Note the spelling, two n's. The Virginia Historical Society has a photo and short descriptive paragraph at: http://www.vahistorical.org/lva/mannsfield.htm

I'm wondering if any portion of the house is still standing. I have seen it's location on maps related to the December 1862 Battle of Fredricksburg, but I have no idea if there is still anything there.
Posted by Carolyn at 9:12 AM No comments: 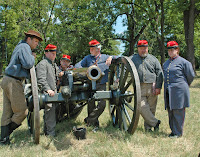 On Sunday, August 12, 2007, I attended a demonstration of the firing of a Napoleon 12-pounder cannon, one of the types of cannon used by both armies in the Civil War. It was a wonderfully informative demonstration, with all of the crew members contributing to the explanation and demonstration.

The uniforms worn by the crew in the photo to the left are of the Washington Artillery Battalion of Louisiana.

There is going to be a re-enactment of the Battle of Fredericksburg of December 1862 on December 8-9, 2007 to commemorate the 145th anniversary of the battle. For more information, visit the National Park Service page at: http://www.nps.gov/frsp/special.htm