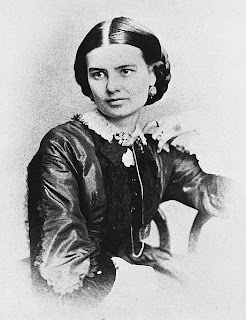 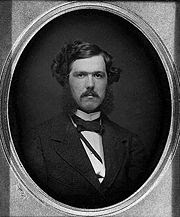 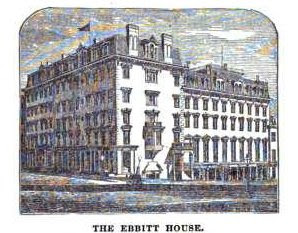 In the memoirs of William Arden Maury, Collections and Recollections, he mentions that he and his family lived at The Ebbitt House. He doesn't say when they lived there, other than to say "After coming back to live in Washington . . ." It seems that this is where he and Betty lived after the Civil War, although I have not yet been able to document when they returned to Washington. The Ebbitt House was located at 14th and F Streets Northwest, now occupied by the National Press Club. They later moved to 1767 Massachusetts Avenue, a house which was razed in the 1920s to be replaced by office buildings.
Posted by Carolyn at 6:27 PM 2 comments: 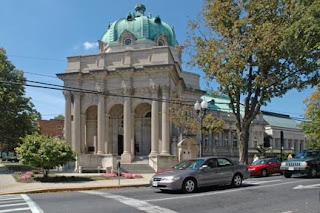 This is the public library in Winchester, Virginia. Unfortunately, this photo does not do justice to the beauty of the building. Winchester is a small town, a population of under 24,000, so to find such a building there was surprising. Loving libraries as I do, I wanted to see the inside, and it too was beautiful. 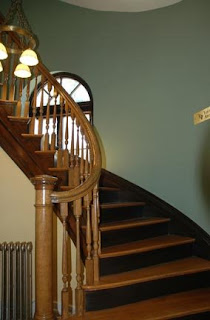 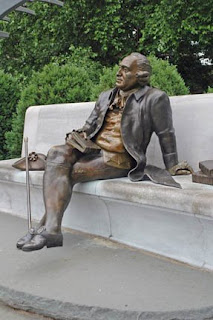 Continuing with the theme of sculptured figures at eye level, where one can get a better feel for the person depicted, I offer this photo of the sculpture of founding father George Mason at the Tidal Basin in Washington, DC. I have visited his home in Virginia, Gunston Hall. 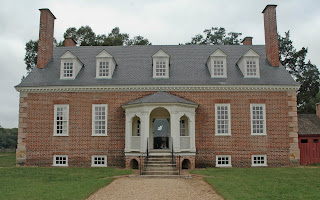 This is the river entrance of Gunston Hall. The house feels hospitable to me, warm and friendly. On the property there is a small family cemetery, the final resting place of George Mason, his wife Ann, and other family members. I was moved by the inscriptions recording the deaths of James and Richard Mason who died at the age of six weeks in 1772, to be followed by their mother's death three months later.
Posted by Carolyn at 12:05 PM No comments:

Abe and Tad Lincoln in Richmond 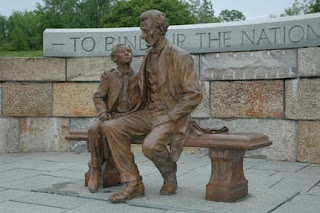 Inspired by a photo of a figure of John Cabot in Bristol, England at Random Distractions, I offer a photo of Abe and Tad Lincoln at the Treadegar Iron Works in Richmond, Virginia. They visited Richmond in April 1865 after the end of the American Civil War and just 10 days before Abe Lincoln was assassinated.
Posted by Carolyn at 4:56 PM 2 comments:

A Walk in Fredericksburg 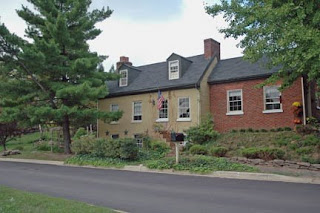 The Toll House on Sophia Street 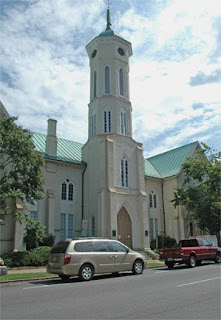 After a stressful week at work, I decided to devote today to relaxing activities. I went for a walk in Fredericksburg, which I always enjoy. In spite of the horrors of war which took place on the streets of this charming little town during the American Civil War, there is a sense of peace here which I would not expect, given the sense of unease I have always experienced in Manassas, another area which also experienced two horrendous Civil War battles.
The second photo above shows the Circuit Court building on Princess Anne Street. It was built in the 1850s and was designed by the same architect who designed the Smithsonian Castle in Washington, DC, and St. Patrick's Cathedral in New York.
I went into Riverby Books on Caroline Street where I bought Barren Ground by Ellen Glasgow and another copy of In This Our Life by the same author. I then took a picnic to the City Dock at the end of Sophia Street where I ate, started reading In This Our Life, and reveled in the peace of the Rappahannock River. George Washington's boyhood home, Ferry Farm, is across the river not far from City Dock; and there is a house across Sophia Street from the dock which was the toll keepers house in centuries past.
Re-reading the beginning of In This Our Life reminded me of how important trees seem to have been to Virginians of the 19th century. There is a wonderful movie version of this novel starring Bette Davis and Olivia de Havilland. It is shown on Turner Classic Movies from time to time, and it is well worth watching.
Posted by Carolyn at 4:09 PM No comments:

A Blog Worth Visiting

One of the great joys of the internet is being able to connect with others around the world. One of my favorite blogs is called Random Distractions. A "bookish blog" from England, it is a meeting place for many who enjoy English literature, both past and present. It also sports beautiful photos of places I will probably never be able to visit in person, most recently of Lyme Regis which I associate with Jane Austen.
Posted by Carolyn at 6:45 PM 1 comment:

Betty and Will After the War

The House on Caroline Street has now finished publishing the online version of Betty Herndon Maury's Civil War diary. I have begun doing research to annotate the diary and have had a wonderful time chasing down facts and checking the reliability of the information Betty was getting about battles.

I am especially looking for information about Betty's life after the war. She and Will moved to Washington DC at some point. It's a bit difficult to pin down exactly when they moved there, as the Washington Post (the source of much of my post-war information about Betty and Will) did not begin publishing until 1877. I do know that they lived at 1767 Massachusetts Avenue in Washington. The house no longer exists, having been torn down to make way for office buildings.

It was surprisingly difficult to learn where and when Betty died. When my efforts failed, I turned to the reference section of the Central Rappahannock Regional Library, and they were eventually able to locate a death notice for Betty. She died in January 1903. The death notice referred to her as "a woman of forceful character and intellect", which brought a smile to my face. Now who do you suppose supplied that description?

The death notice did not say where Betty was buried, but once again thanks to the wonderful reference section at CRRL I learned that Will is buried in Rock Creek Cemetery in Washington. Believing there was a good chance Betty would be buried near her husband, I went to the cemetery and found their grave. Nannie Belle was there too! Nannie Belle never married. She went on to write some articles for Cosmopolitan Magazine. At some point she moved to an apartment building in Washington, also now gone.

That's where I am in my research. I will update the blog from time to time with more information about Betty, Will, Nannie Belle, and Alice, the baby born to Betty after the conclusion of the diary.

In addition, though, I am going to devote space in the blog to other things, beginning with the Virginia novelist Ellen Glasgow.
Posted by Carolyn at 6:34 PM No comments: