Yesterday I was reading about Kate Chase again. I don't like the biography I have - too much speculation, too many words like probably or undoubtedly. I want facts. I have asked the library to order for me through interlibrary loan a copy of Kate Chase, Dominant Daughter. The least expensive copy I saw for sale online in $77, and that is way beyond the capabilities of my budget.

Kate fascinates me. She was beautiful and brilliant; her marriage fell apart; she fell from her pedestal and crashed in a big way, ending her life in humiliation and near poverty.

I went looking for more information about her online and found a notice in the NY Times for October 22, 1888 that she was writing her memoirs. None were ever published, as far as I can tell. Another notice in a literary journal the next year said she was writing a biography of her father and was considering writing her memoirs. What happened to these manuscripts, if they did indeed exist? I would love to read them. She has really captivated my imagination.

The house Kate and her father, Salmon P. Chase, lived in during the Civil War at 6th & E Streets in Washington, was demolished long ago. Another house owned by Chase called Edgewood, in which Kate lived after her divorce, was also demolished. A home in Rhode Island belonging to her ex-husband, William Sprague, burned and he nearly with it. I had this image of Kate's avenging ghost setting the fire, but the articles I read said something about faulty wiring being the cause.

Here is a picture of Edgewood, where Kate ended her days. 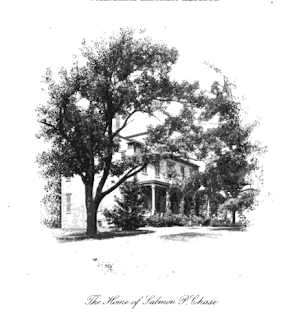 It has been a long time since I've posted here, but I thought an excursion I made yesterday was worth mentioning.

Yesterday I drove to Hanover Courthouse (about 20 miles north of Richmond) to attend a trial reenactment. The courthouse was built between 1737 and 1745 (date uncertain). The trial took place in 1763 and is called The Parsons Cause. It had to do with how clergymen were to be compensated. If you are interested in the details of the trial, here is a link. The reason for doing the reenactment is this was the event that gave Patrick Henry his start as an orator of renown. It was a lot of fun, and it made history come alive for me in a way I have never known before. The clergyman plaintiff was the Reverend James Maury, who was the great grandfather of Betty Herndon Maury, the woman whose diary I transcribed. As chance would have it, I was asked by the "sheriff" to sit in the plaintiff's chair as the Rev. Maury, which I thought was great! Other members of the audience were the jury and other clergymen with an interest in the suit. None of the audience participants had any lines. It was a very good performance, well worth seeing for anyone with an interest in history. There was no admission charge. Hanover Tavern, where Patrick Henry stayed when he had to make court appearances, is right across the street. I toured it. There is also a restaurant and gift shop.
Posted by Carolyn at 4:19 PM 2 comments: