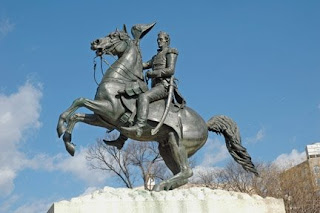 Sculptor: Clark Mills
Dedicated in 1853
Created in bronze from cannons captured from the British in the War of 1812

Posted by Carolyn at 9:21 AM No comments:

Photos of Blandford Church and Cemetery 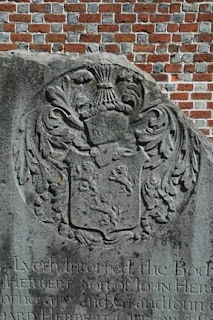 The second oldest headstone in the cemetery, dating from 1704. 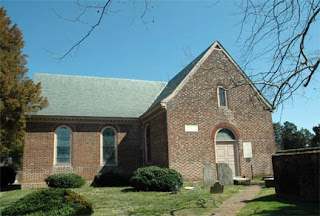 Blandford Church
Petersburg, Virginia
Constructed in 1735
Posted by Carolyn at 8:02 PM No comments:

Yesterday was a beautiful spring day, and I took advantage of the delightful weather to drive to Petersburg to look at an old church there, Blanford Church. Surrounding the church is a 300-acre cemetery, the second largest cemetery in Virginia, the largest being Arlington National Cemetery.

Petersburg, which is south of Richmond, was under siege during the Civil War for 10 months. There is a mass grave for Confederate soldiers in the Blanford Cemetery. The church itself was used, as so many churches were during that time, as a hospital.

The cemetery dates back to 1702. The church was built in about 1735 and was abandoned by the early 1800s. Petersburg's Ladies Memorial Association turned the church into a chapel honoring Confederate General Robert E. Lee. Today Blandford Church is noted for its Tiffany windows, one for each of the 13 Confederate states. There are also Tiffany windows for Maryland and Arkansas, and a fan light over the entrance door. The windows were made between the years 1901 and 1908 at a cost of $350 each. Each window, except the one for Kentucky, pictures an apostle. They are unbelievably beautiful and are a must see for anyone who happens to be in Petersburg.

Photos are not allowed inside the church, so I don't have any photos of the windows to share.
Posted by Carolyn at 12:21 PM No comments:

Kate Chase was the beautiful and brilliant daughter of Salmon P. Chase, Secretary of the Treasury in the Lincoln Administration and later Chief Justice of the Supreme Court. Salmon Chase was a widower three times over. He raised Kate to grow into an accomplished woman who would grace his home in whatever position he rose to, his ultimate unrealized ambition being president of the United States.

I have been eager to learn more about Kate since reading about her in Team of Rivals by Doris Kearns Goodwin, so it was with hopeful expectation that I began reading this book.

The text is heavily footnoted, but there is no separate bibliography, which I find to be a deficiency. While Ms. Lamphier did draw heavily on the Salmon P. Chase papers in various locations and the papers of Kate Chase and William Sprague, she also relies heavily on recent scholarly books to interpret events and attitudes of the 19th century.

I frankly am not interested in Ms. Lamphier's suppositions and conjectures. I think the book would have been better served without them.
Posted by Carolyn at 9:20 AM No comments: